In the latest blog article, we looked at how to get started with Pascal Analyzer (PAL). When running a project in PAL, the reports are listed in a tree, as seen on the left side: 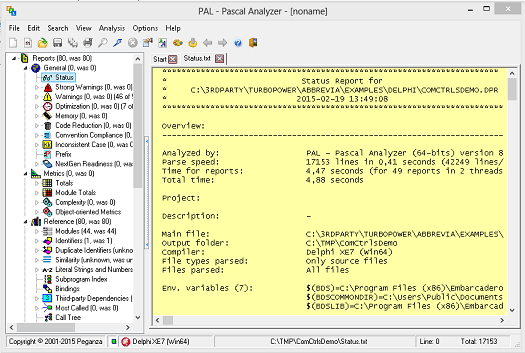 The first report we will look at is the Status Report. This report is always generated. It shows the parameters used when analyzing, and also displays some statistics, like time to generate the reports. You can use this report to verify that PAL finds the code that you want, and that the right folders are excluded etc.

A central report is the Brief Cross-reference Report, (under Reference in the tree). It will for each reported identifier, list where it is declared and referenced.

The Complexity Report (under Metrics) lists for each function the amount of complexity expressed in different key numbers, like Decision Points (DP) and Lines Of Code (LOC).

The Warnings Report (under General) is interesting, because it points out possible problems in your code. It is also the report with the most number of sections, each giving information for one kind of warning.

The Code Reduction Report (under General) will for example report identifiers that are declared, but never used. Use it to remove those declarations, and make your code easier to read and maintain.

In the next blog article, we will look at how you can integrate PAL with the Delphi IDE.