With Pascal Analyzer 8 just released, we want to give you a tour of the new version and all its new features. Here we go:

The first big new thing about Pascal Analyzer 8, is that there is now also a 64-bit version. Old 32-bit version is still available, and should give just the same results. But if you are on a 64-bit system, which you probably are nowadays, you should use the 64-bit version. It runs quite a lot (10-20% at least) faster than the 32-bit version.

One drawback however, is that it uses nearly double the amount of RAM, because of all pointers now being 64 bits. Also expect more speed improvements in later upgrades, as we are continuously refactoring and speeding up the parser and report builder. The new 64-bit GUI program is PAL.EXE in this version. The 32-bit version is PAL32.EXE. For the command-line program, there are PALCMD.EXE and PALCMD32.EXE.

Another improvement, is that we have made quite an effort to remove false and/or meaningless warnings from the reports. We have not succeeded fully yet, there will always be situations where a static code analyzer cannot fully resolve all identifiers. One common situation is when you create objects through class references, where the actual type of the objects will be determined at runtime.

Further on, Unicode is fully embraced in this version. If you use for example, Russian characters in your identifier names, those will also appear in reports. The reports are now output in UTF-8 format. That’s for most of the invisible improvements in Pascal Analyzer 8, now let’s start up: 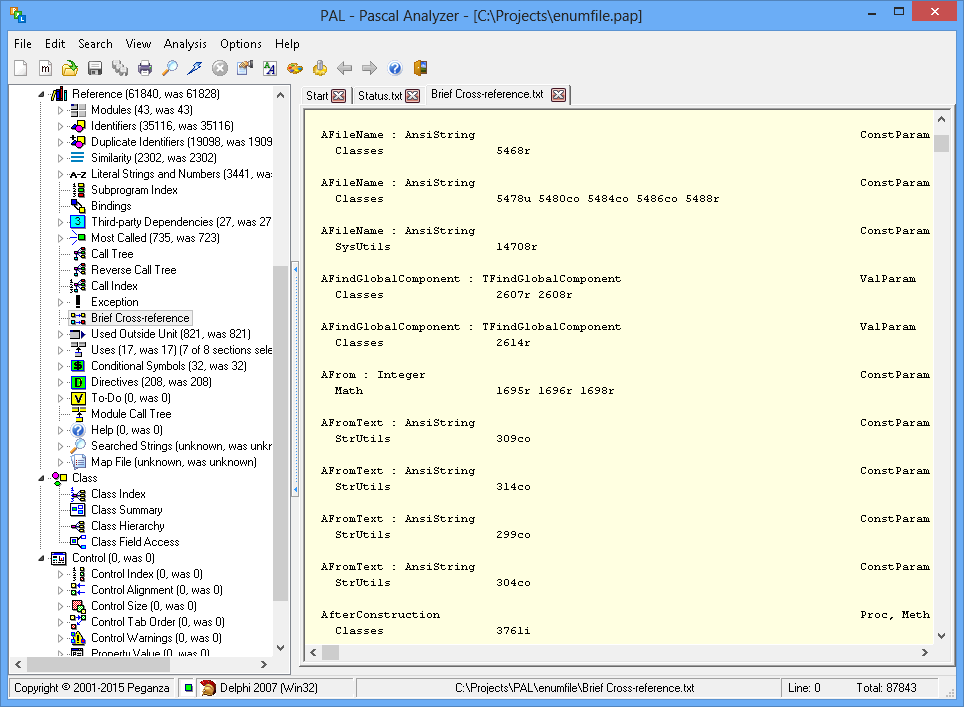 Reports are now displayed in multible tab pages. There is also a “Start” tab page (optional), that displays the blog page at our web site. Also, reports are created in the background, so it is now possible to start looking at reports, before all of them are created. When starting building a PAL project, all reports in the tree to the left are disabled. When a report has been built, the tree item will be enabled. You can thus start looking at a report, before all of them are ready.

Another great improvement in PAL 8 is the fullblown editor, that you can use for editing source code: 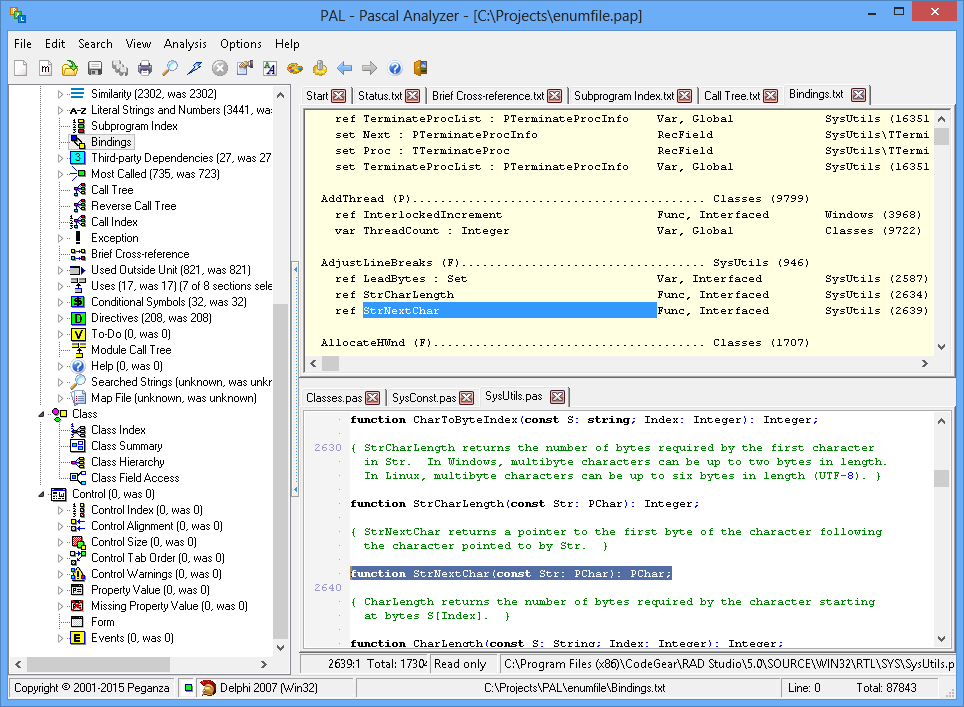 Editors are also displayed in multiple tab pages. The editor has features like - Syntax highlightning - Undo/redo - You can decide whether files opened in the editor, are initially read-only. Also, when saving files, older versions can be saved in a history folder (like in Delphi IDE).

There are also new navigation features in the editor. For example, if you right-click on an identifier in code, it will display a local menu with all references. Click on a reference to jump to the location.

Also, double-click on an identifier to go to the declaration. Use the Back/Forward buttons on the toolbar to quickly navigate between code locations. Even if the built-in editor is powerful in PAL, we still recommand that you use the full-blown Delphi IDE for normal development work.

Another feature, that we want to highlight, was introduced already in PAL7. It is the possibility to create reports in CHM format. This allows for quick navigation and free-text searching of reports. To setup this, a prerequisite is the free HTML Help Workshop from Microsoft. In the Preferences dialog, enter the path to your installation of HTML Help Workshop: 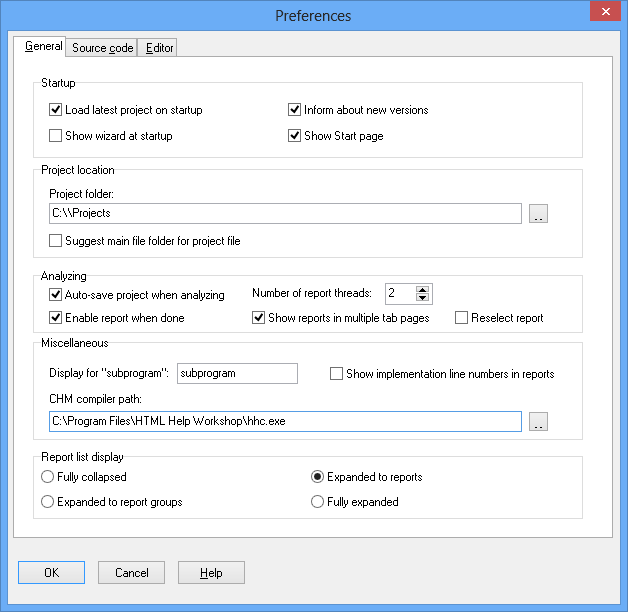 In the project which you want to create CHM reports, open Properties and the Format tab page: 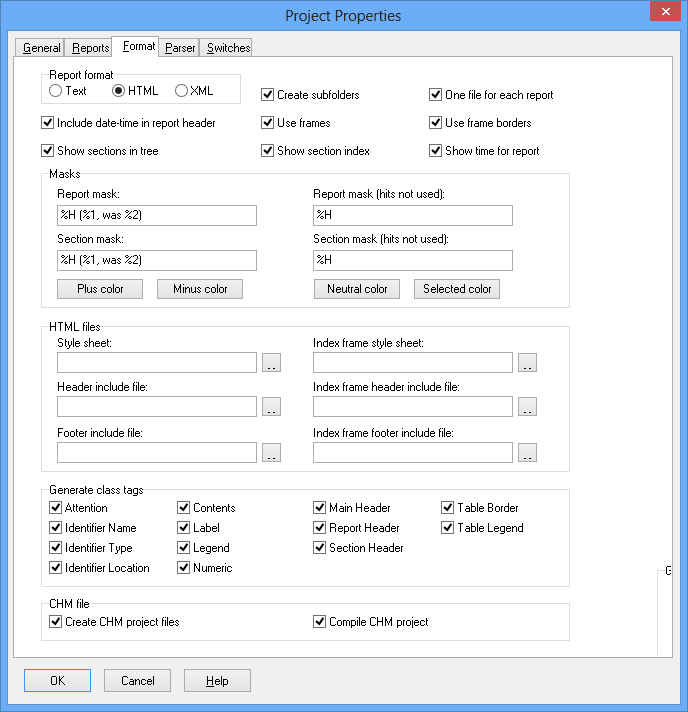 This was just a brief introduction to Pascal Analyzer 8! There is much more to it, check out for yourself by downloading the free trial versions. For a more complete list of changes, see the history page for Pascal Analyzer.