This article describes changes and new features in Pascal Analyzer version 9, compared to version 8.x. The new version has been enhanced with a lot of smaller and greater features. As part of our continuing quality work, there are also numerous optimizations and error fixes.

There are 16 new report sections, and the total number of sections is now 231. These sections are divided over 51 different reports

This section reports locations in your code where index errors can occur. These are errors where an array index with an invalid value is accessed. Some examples: 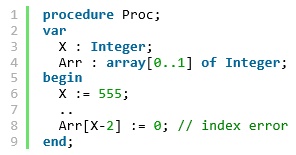 If the code had instead been written as "Arr[553]" (an explicit value), the compiler would have halted on this line. But for a variable, it does not.

These kind of errors will give an exception at runtime, and should of course be avoided as much as ever possible!

This section lists locations in your code where a pointer possibly is misused. It is for example a pointer that has been set to nil and further down in the code is dereferenced. 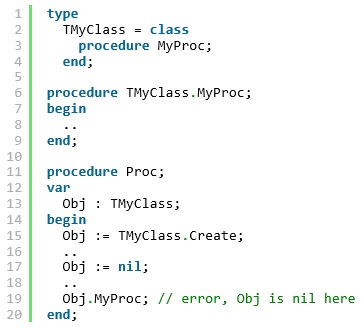 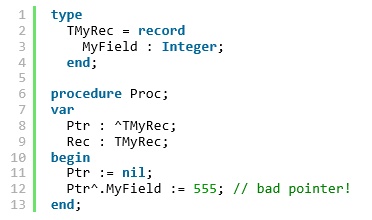 This section lists locations in your code with a possibly bad typecast. These are typecasts that cast into a type other than what the variable itself has. If you use the "as" operator, an exception will instead be raised. Otherwise there may be access violations and errors in a totally different code location, which can be awfully hard to track down.

In the example above, the last line could better be written (although still faulty!) as

This should result in an exception. But it is still preferable; instead of letting the code proceed resulting maybe in access violations later in a totally unrelated part of the code, which is not fun to debug.

The last example shows code that is bad for 64-bits. The pointer is then 64-bits, whereas an Integer still is 32-bits.

This section reports locations in your code with assignments between objects and interface variables. Normally, unless you really know what you are doing, it is a bad idea to mix interfaces and objects. The reason is that the reference counting mechanism of interfaces can be disturbed, leading to access violations and/or memory leaks. 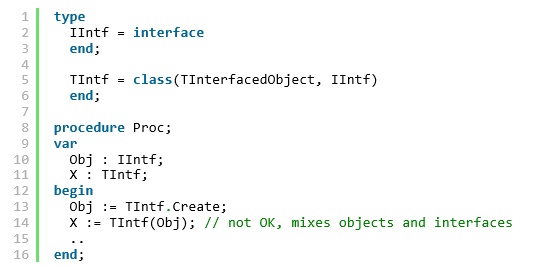 New section in Warnings Report: "Set before passed as out parameter" (WARN54)

This section reports locations in your code where a variable is set and then passed as an "out" parameter to a function. Because the "out" parameter will be set in the called function without being read first, it is at least pointless to set it before it is passed. It may also indicate some misunderstanding about the code.

Consequently it is recommended to check if it is meaningful to set the variable before passing it. If not, remove the assignment, or else modify the signature of the called function from "out" to "var".

See also our blog article about out parameters. 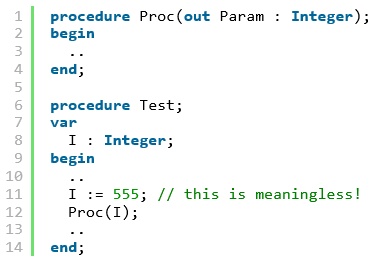 This section lists class fields or methods that redeclare ancestor members with the same name. Although valid, this may lead to confusion about which member is referenced in a given situation. The recommendation is to refrain from reusing the same name, because this will only make your code harder to understand and maintain. 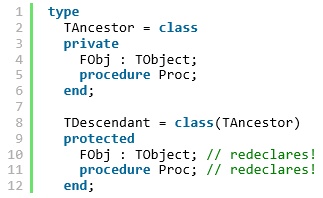 New section in Warnings Report: "Parameter to FreeAndNil is not an object" (WARN56)

This section reports locations in your code where FreeAndNil takes a parameter which is not an object, for example an interface variable. This may lead to access violations. Unlike Free, the compiler will not complain at compile-time. 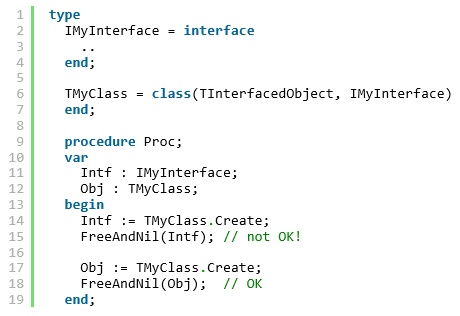 This section lists locations in your code where a case statement does not list all possible values of an enumerated type. This is probably most often as intended, but it may also point out an error in the code. 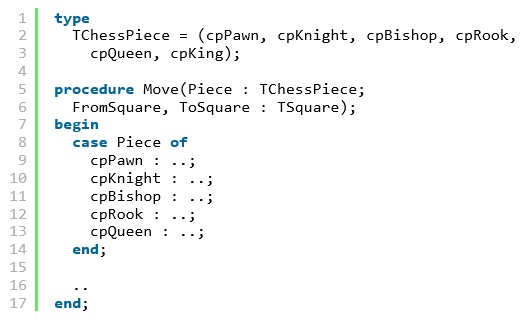 In the code above, cpKing is missing from the case structure, and will trigger a warning.

If you want to suppress warnings for a case-structure where you know it is safe to exclude one or more enumerated constants, just use the PALOFF feature on the same line as the "case" keyword.

Too avoid warnings for the examples above, choose the code which uses parentheses.

This section lists locations in your code where floating point numbers (variables, constants, or explicit values) are directly compared. It is considered not secure to compare floating numbers directly. Instead use functions in Delphi's System.Math unit, like IsZero and SameValue. 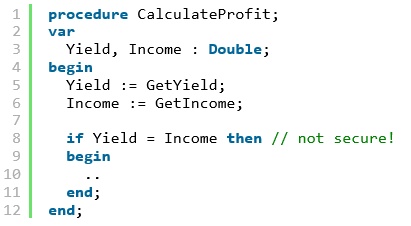 In the example above, use instead SameValue function from System.Math unit.

This list contains objects which can be declared and implemented as an interface type, instead of as the class type implementing the interface. One major advantage is that interface reference counting can be used, so you will not have to explicitly free the object yourself. 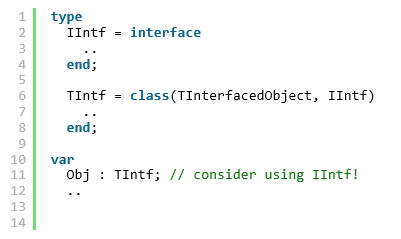 In the code example above, consider instead declaring "Obj : IIntf" instead.

This section lists locations in your code where superfluous parentheses can be removed, simplifying the code and making it easier to read. 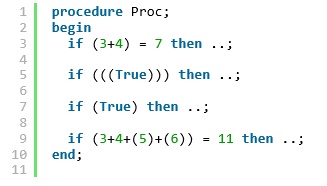 In all the examples above, the parentheses may be removed without changing the meaning of the code.

This section lists locations in your code with repeated common subexpressions. Those may be candidates to put into temporary variables in order to simplify and optimize the code.

In the code example above, consider putting the result of the expression "A+B+C" into a local temporary integer variable. If this really gives faster execution depends on how the compiler generates the machine code. But at least your code may become easier to read and understand.

If any of the variables involved in the repeated expressions would have been modified, between the locations, there should not be any warning.

Removing the unneeded parameter value will make the code shorter and easier to read.

In the code example above, the call to ProcWithDefaultParam does not need to include the parameter P, because P is assured to have the value "nil".

This section reports locations with inconsistent conditions. These are places where a condition check is repeated, even if the outcome will be the same as in the previous location.

In the code example above, the expression "I = 1" has already been evaluated higher up in the code. Thus, the code is not optimal and needs work.


New section in Code Reduction Report: "Typecasts that possibly can be omitted" (REDU23)

This section reports locations with typecasts that possibly can be omitted. These are locations where the typecast casts the variable to the same type that it already has.

Numerous bug fixes and minor improvements have been added in this major new release. Often those fixes are for the parser and the evaluation of identifiers, like improving handling of generics and overloads. Also when it comes to performance, many parts of the program now execute even quicker than before.

These files can now directly be selected and loaded as the main file for a project. You can also select a main project file (*.dpr), with the same effect as in version 8.x, which was to implicitly also load the dproj file (when the setting "Use Delphi project options" was activated).

You can now use an optional second parameter /AUTO in PAL.EXE (first parameter must as before give the path to the project) to automatically load and analyze the project and then terminate the application. This parameter makes it easier to schedule (with Windows' Task Scheduler) analyses where PAL is automatically started and stopped.

Example of a command line:

This will automatically start PAL.EXE, load the project MyProj.pap and analyze it. PAL.EXE will then terminate.

Another option is of course to use the command line program PALCMD.EXE for these tasks.

For the Uses Report, an additional file Lattix.xml is created in the report directory. You can use it to integrate with Lattix products.

When selecting report sections, there is a new button "Defaults". It selects the default sections when clicked. This is very convenient, for example when you have temporarily removed some sections, and want to reselect only the default ones.

Starting with this major version 9, Pascal Analyzer now uses a subscription based licensing model. Each license now includes a full year of updates and new releases. After that period, additional support plan periods can be bought. See the orders page for full details.
<